So it was bound to happen sooner or later... I just missed Ollie (our white american bulldog boxer mix that we had to put down last month at 12) that we had to have another white bully running around the house

Thru pure luck and a lot of digging we were able to finally find one that wasn't deaf and that had a GREAT personality and temperament.


True to the American Bulldog breed, Angus (or just Gus as the boys in the house call him) is a BIG ham... a real character with a tail that never stops wagging. I have researched the breed for years and have had the opportunity to work with 1 or 2 in my behavior career, but finally having my own from a pup is really fascinating finally seeing all that I've read about them put into play.

So with out further adieu here's a few pix of him. We just got him on Tuesday

This is the picture his pwner sent me when we were trying to decide on him. 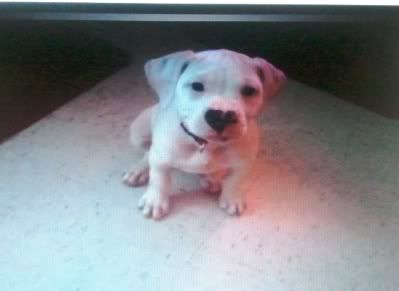 This is when he first got here, chillin on the porch with myself and my older son Breyden 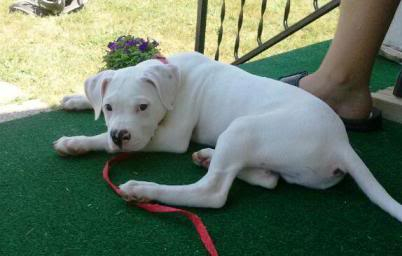 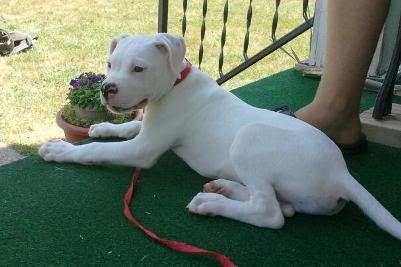 Trying to figure out how the steps off the back porch works... he's so NOT graceful. He usually face plants down the stairs. How could you not with tree trunk legs like those and size 9 paws 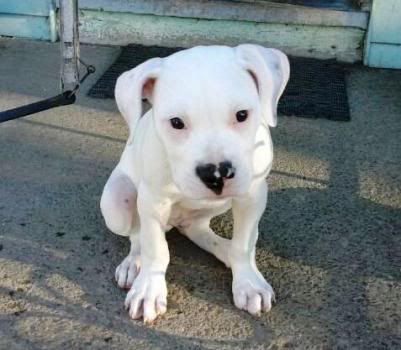 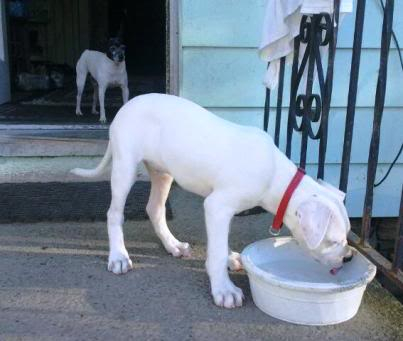 Then after a loooong day playing 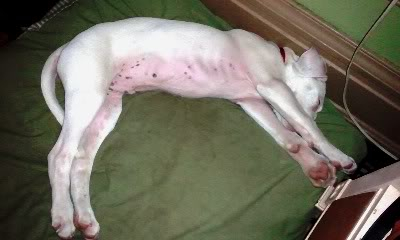 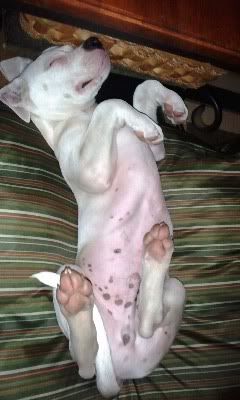 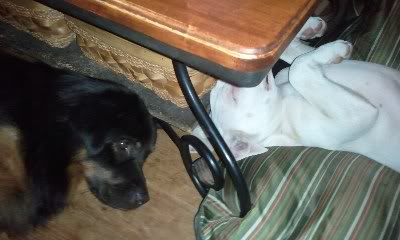 So that's it for now

hope ya liked them

Yeah he is super white... only has a small teenie brindle spot behind his right ear and a few freckles that show thru from his skin. I imagine he will get some more spots as he grows but that's ok

awwwww! he is soooo cute ^ ^
I love american bulldogs! but I haven't seen any walking around in England

They remind me of chance? from homeward bound?

If he was one of them :P

chance was indeed an american bulldog in the remake of homeward b ound. however in the original homeward bound, that is an english bullterrier. the breeder of chance is actually around my area somewhere. theres several bulldogs out of her line related to her chance runnin around the tri state area

I love the name Angus

What a lovely little puppy

Works at a Pet shop

looks like he has a black heart on his nose 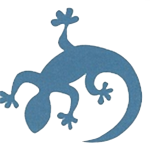 It does look like a little black heart aye

my leo and my dog both have heart spots on their noses... the irony

Ya know what becca he is actually a very god pup. One of the more low key ones i've dealt with in a while but maybe that's because in my busines I don't usually see pups until ther out of control

hes very smart... a bit of a clown, a real cuddler and leaner like my dane was (leans into you when you pet him), however he can be stubborn and pig headded in typical bulldog fashion